Zubrowka International - Je suis Zu (radio edit)
Update Required To play the media you will need to either update your browser to a recent version or update your Flash plugin. 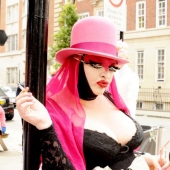 Zubrowka International - Je suis Zu (remix)
Update Required To play the media you will need to either update your browser to a recent version or update your Flash plugin. 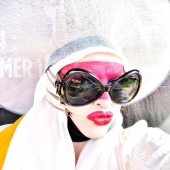 Zubrowka International - Dial T for Terror
Update Required To play the media you will need to either update your browser to a recent version or update your Flash plugin.

My name is Zu Xenia Lucrezia, I was born in Belgium but I live in Amsterdam now. I started my career in Berlin, as a showgirl in the cabaret “Chez Romy Haag”. The place was always filled with celebreties like Mick Jagger, David Bowie, Nina Hagen, Freddie Mercury, Bette Midler, Udo Lindenberg usw., usw., who ofcourse were my biggest fans. After spending some years in Germany I was forced to return to my homecity Amsterdam because one of the best discotheques ever “Roxy” opened its doors. So I became the Roxy Princess. My shows were always over the top but thats what made me famous. I’ve been jodeling out of my pussy, pulling metres of dirty laundry out of my vagina and putting loads of whipped cream cakes in places of my body where the sun don’t shine. During the Golf war I did a show called “The last fuck on earth”. Famous was my “Madonna versus Ayatollah Khomeini” act. Where me as Madonna kills the Ayatollah after she raped him, covered all naked in blood. I worked with people like Leigh Bowery, Jeff Stryker, The Shamen, Mc Kinky, Army of Lovers, Haute Couture Junkies, Erwin Olaf, Jeff Stryker, Joost van Bellen, Harrie Wildeman, Sean Penn (who came to my birthday party in my home), Mariska Veres etc. etc.. All good things come to an end so unfortunately the Roxy burned down. Me of course being the last person who left the building, thinking I was having a hot flash whilst the roof was on fire. Music has always been the love of my life so I’m working as a DJ now. I won an award for most sexy DJ, and I made a record with ‘Les deux Electriques’ called “Je suis Zu”. My latest project was together with Larry Tee where I did the vocals for “Je l’aime le chocolat” et je dis blah, blah, blah, blah, BLAAAAAAAAAAAAAAAAAAHHHHHH!!!!! Quote Zu:”It’s like all these garments just wanna run away from my body!”. Love